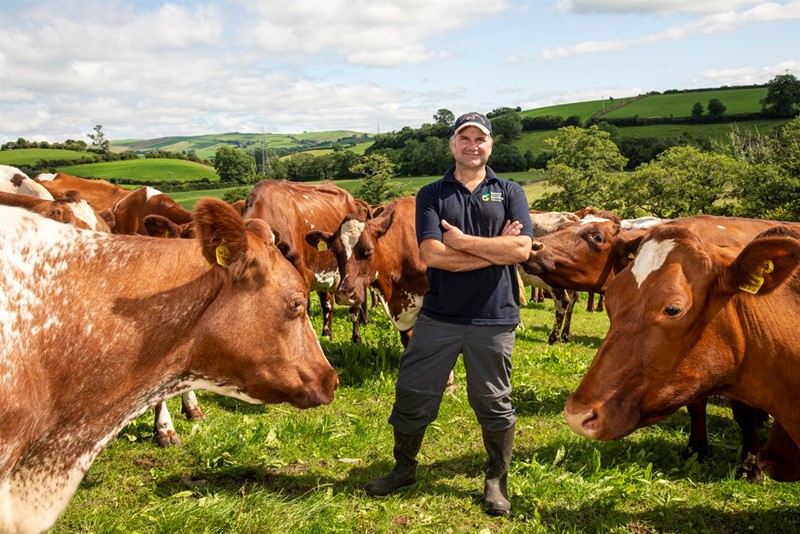 Farming from the ground up

“Farming is very much about looking ahead to the next generation – whether that’s our children or someone else’s – we need to look to the future at all times,” says James Robinson. James farms with wildlife and the environment at the forefront of everything he does, while at the same time ensuring the farming business is sustainable and the cows they rely on are fed and cared for to the highest welfare standards.

James understands that if he wants healthy happy cows he needs to start with healthy, nutrient-filled soil and gaining organic status was a big step in the journey for this farm.

“To gain organic status from the Soil Association you need to show good record-keeping and that, when managing the land, you are not using artificial fertilisers or pesticides,” he says. “It’s all about looking after soil health, which then promotes good cow health. If you get the soil right, then everything else tends to follow.

“It’s about good husbandry of the land and livestock and being able to farm within your means – you’re not pushing anything too hard and you’re not expanding too much. You show that you are working with nature, not against it.

“We do regular soil testing to make sure we are keeping the nutrients at a sensible level - not too low or too high – and we are using multi-species planting. Even before becoming organic, we would have a lot of clover in our leys - clover is the organic farmer’s friend and without it we probably wouldn’t be able eto farm because it’s so good at providing free nitrogen; it fixes the nitrogen that the grasses need to grow.

“It’s a win-win for the cows and also for the environment, it’s great for bees as it flowers and is deeper rooted than grasses, so it can draw different nutrients up from the soil. For a few years we have been putting in herbal leys such as chicory and plantain, which are longer rooted and draw up different minerals and provide more drought tolerance, so if we get any patchy weather and drought we can cope and they will keep growing when nothing else does.”

One of the thrills for James is that the work on the soil has resulted in far more insects and pollinators and this, in turn, attracts more birds, bats and mammals to the land. Another aspect of environmental work that plays a huge role in this is the farm’s traditional 25-year hedgelaying rotation. “One of the main features at Strickley Farm is our hedgerow management,” James explains. “We still manage the hedgerows on the traditional rotation of 25 years between hedgelaying. We don’t flail interior hedges; roadside ones get done just for safety, but all the seven miles of internal hedges are on this long rotation, which gives you a mosaic of different ages and habitats. A hedge is more than just a single habitat, it varies throughout its management cycle. The ones we did last year are only 4-5ft tall and 3-4ft wide, whereas some of the older ones are a huge 20-22ft tall. Different species of birds and mammals all live in the age of hedge they prefer, so you get a full variety of different creatures.

“We have a healthy population of tree sparrows, which are a red-listed bird – they are really just there because of our hedges – and then we get the bullfinches, greenfinches, tits and farmland and woodland edge birds.

“On the beck we have dipper and kingfisher, and we also have white clawed crayfish in the becks, which are a protected species, and otters, which feed on the crayfish. Because the crayfish population is healthy, the otters can live here as well. That’s just what we see, there is so much around that we don’t see, like the insects and tiny things in the soil. You need the tiny things to provide the food for further up the chain, so even
a tiny grub is just as important as a kingfisher or
an otter.”

Strickley is a family-run farm, with James and his dad, Henry, running the 300-acre dairy business with the help from James’s mum Kathleen who does the paperwork. His son Robert, 17, who helps out and James’s wife Michelle, who looks after the educational visits that the farm has been running for the past few years. Younger son Chris, who has just finished his GCSEs, also helps when he can, and the farm has one part-time worker, Robert.

The Robinson family have been at Strickley Farm, near Kendal, since 1875, and since then it has grown from 80 to 300 acres, the most recent purchase being 60 acres from a neighbour three years ago. It’s a heritage and a landscape that James is proud to be part of.

“The farm is all owned now and it’s all grassland, but is quite challenging terrain. It’s essentially three drumlins – a drumlin is a glacial-formed landscape where, as the glaciers retreated down the central Lake District back to the coast, they left these half egg-shaped hills. Our farm is three drumlins with wet ground in the bottom. It makes it picturesque, and looks a bit like The Shire from The Hobbit.” 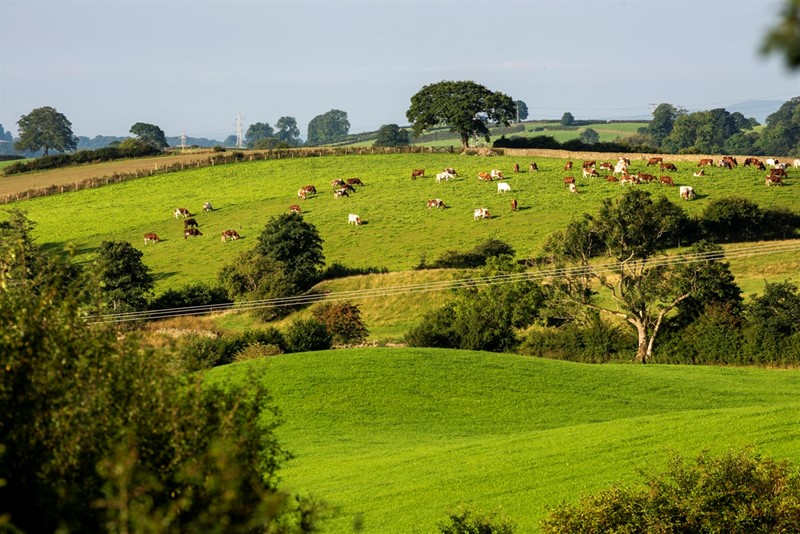 The landscape is perfect for the dairy shorthorns, whose pedigree on the farm goes back to 1915. “We have more than 100 years of pedigree,” says James. “It’s now a closed herd, which we did when we converted to organic
16 years ago. We are milking about 120 cows and have about 140 young stock. The milk is sold through an organic cooperative.

“We have Shorthorns not just because we have a loyalty to the breed, but also because they suit our type of farming. It’s quite challenging terrain, the topography of the farm is long and narrow, so they have to walk quite long distances for grazing.”

James explains they try to keep them outside for as long as possible to use nature to feed them, rather than buying in too much. He says the dairy shorthorn is great for health and fertility as well as the walking, and good at converting that grass into milk. They were originally just shorthorns when they were first a breed and the herd goes back to 1822 and is the oldest herd book in the world. 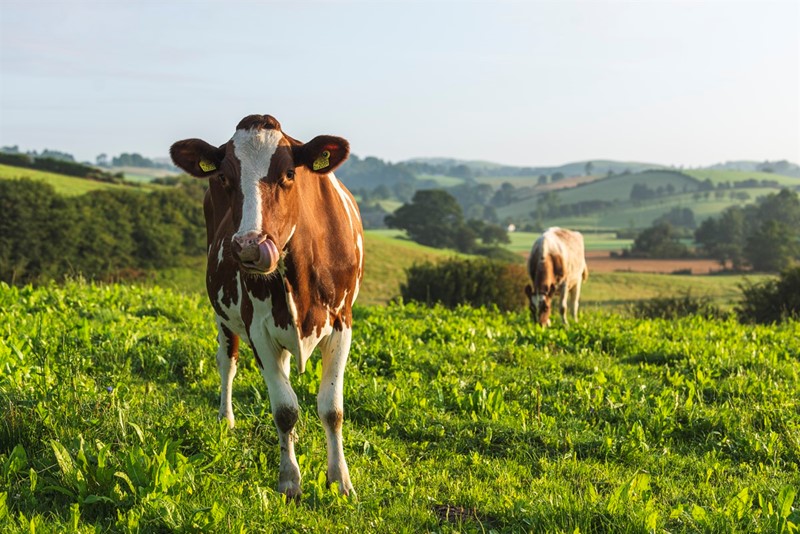 “It’s cheaper for a cow to graze the grass than to harvest it into bales, but then they are also putting the nutrients back into the soil through their manure, which not only benefits the grasses and soils but also other things such as invertebrates like dung beetles.

“If cattle aren’t grazing out in the field, then dung beetles can’t survive, as they need a dollop of muck to live in. Then dung beetles themselves are a source of food for certain types of bats.

“We keep the cattle inside in winter; the steep slopes would get a lot of soil damage and the grass growth is nominal, so we have to harvest grass in the summer to then feed through winter when the cows are housed.”

James says the farm has been in a high level stewardship and is moving to a higher tier in January. This will mean funding for further environmental and educational work on the farm.

“We are having some natural flood management on some areas, so that’s basically allowing the becks to come onto the land and flood when they want to. It’s a big thing for landowners and if everyone had a few hectares they could allow water onto, effectively it would be a massive help for preventing flooding in towns.

“We are also putting in some wood pasture, which is also part of flood management. This involves planting about 25-40 trees in the pasture, but still grazing it. It’s not a huge density, but it is enough to slow and divert water and create a different, unique habitat.

“We have planted an orchard, the old one was taken out in the 1960s, so we are putting in a new orchard of native trees. We also have a 13-acre ancient wood and will manage that. We have been managing it for wildlife and nature as it is, but we are going to improve on this a bit more.”

The new level of stewardship also includes educational access, which gives funding to enable schools to have free visits to the farm.

It’s something they’ve been doing at Strickley Farm for a while now, thanks to teacher Michelle who runs this side of the business. There’s a purpose-built classroom and previous funding enabled the farm to buy a passenger trailer to transport the primary-aged children around the farm.

The farm has been hosting school visits since before the stewardship scheme; the local school would come around because their sons were there and then, James says, they made it official when they got onto the previous stewardship scheme and received funding that meant they could have other schools to visit.

As well as activities around dairy farming, the children are encouraged to explore and love to discover different aspects of wildlife. One project was to look at how animals adapt for the pond or the beck, depending on the running water.

“We look at breeding cycles for things like the caddis fly and see all the different life stages,” says James. “They can look at different species in different grassland, so in a modern silage ley compared to a hay meadow or grazing pasture.

“We are just getting them to look at what’s under their feet and in front of them and once they start looking, they appreciate the small stuff that might have passed them by. And yes, it’s great to see a deer or hare, but it’s the little stuff that is often more important.”

“It doesn’t take much to spark an interest and, maybe in 20 years’ time, they will be the child that saves the planet by inventing something or coming up with extraordinary ideas.”

“With all the work we are doing on the farm we are always looking forward and we are talking decades before you see some of the benefits. It would be easy to take it from month to month, and year to year, and push everything to its limit but that really is short-term thinking. As an industry we need to look 20, 30, 40 years ahead.” 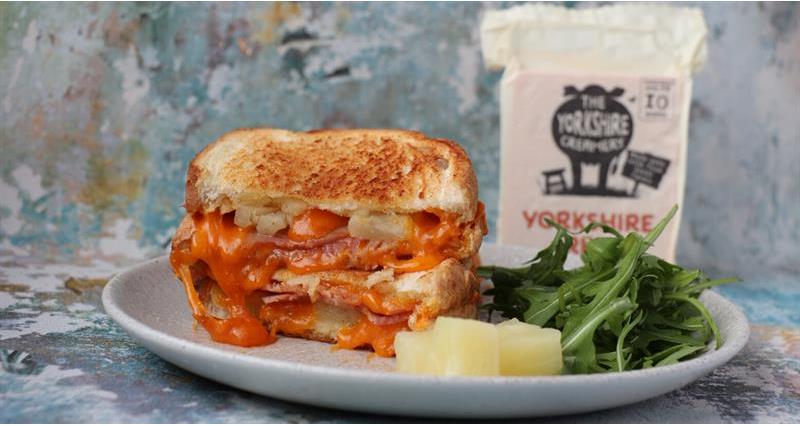 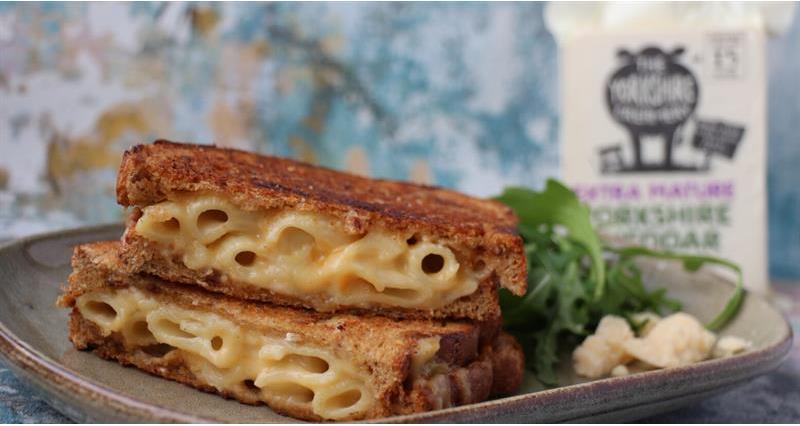