Food and Farming - Protecting the environment - Why is water crucial for food and farming? 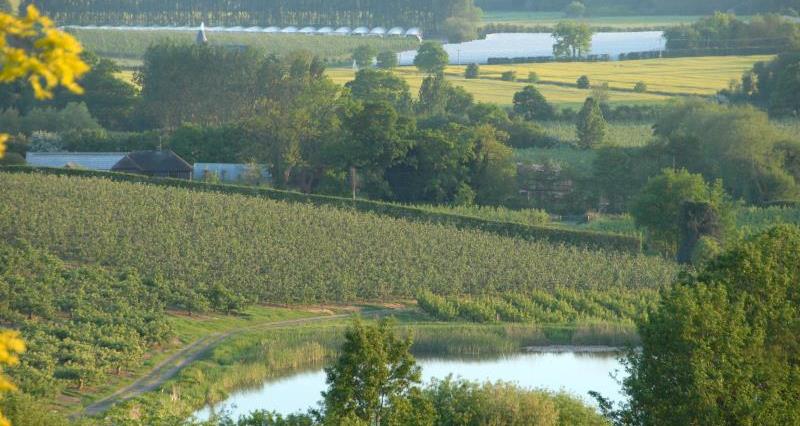 How do farmers help prevent flooding?

Flood risk management - taking steps to reduce the risk of flooding and managing flood water when flooding does occur – is an essential part of the work farmers do to protect and manage water resources.

Almost 60% of the UK’s most productive agricultural land is situated on floodplains. In the winter of 2013-14 some 45,000 hectares of agricultural land were flooded, including some coastal areas, at a cost of around £19 million to the sector. Flooding in 2015-16 is estimated to have cost the industry £7 million.

It is important that if farmland is allowed to flood to protect urban communities downstream, or natural flood management measures introduced, that this is done by design rather than default, and that the impacts of food production and the farming business are acknowledged.

The work that farmers do to prevent flooding, such as desilting and cover cropping, helps increase the resilience of their land, as well as reducing the risk of flooding to local communities.

The impact on farmers

Richard has always lived with flooding, but it is the frequency of flooding in recent years which has become so much of an issue. In the past 20 years his land has flooded 11 times.

The NFU's Flooding Manifesto has three key asks of the government's strategy to manage future flood risk: Plan, Protect and Pay (read the manifesto in full here or a two-page summary here).

How are water and food connected?

Water is crucial to food supply. Plants and animals all need water to survive and grow. In addition, farming and food production businesses need access to a reliable supply of water all year round for processes such as cleaning and vegetable washing.

The world’s population is expected to reach nine billion by 2050. As the number of people continues to grow, there is increasing demand for water for domestic uses – cooking, drinking, bathing and washing – and industrial uses, such as manufacturing, as well as a greater demand for water to grow enough food for people to eat.

Over the past century, water use has increased at more than twice the rate of population growth and, according to the United Nations, some 1.2 billion people already live in areas with a lack of physical access to water.

How do farmers use water?

Farmers use a combination of rainfall, mains supply and abstracted water to meet their business needs. Most of the water for crops comes from rainfall. Rainwater that is not absorbed by the soil and plant roots eventually runs into streams and rivers. When there is not enough rain for crops to grow, farmers need to irrigate their fields.

How much water do farmers use?

To put things in perspective, agriculture accounts for just 1% of water usage in England. And the UK’s water footprint for food production is much smaller than it is in many of the countries that we import food from. With British farms currently producing only 61% of the country’s food there is a persuasive argument for increasing production of home-grown food instead of importing products from overseas that have a higher water footprint.

Farmers use less than 2% of the total amount of water that is abstracted in the UK, much less than is taken to provide water to the public and for the energy sector. However, the water that farmers use is often taken in the driest parts of the country, and in the driest years and months when resources are most under pressure.

Abstracted water for fruit and vegetable production is highly regulated. Growers measure their water use and, though new technology and monitoring techniques, can exactly match water application to crop needs. Many farmers have built reservoirs to collect and store surplus river water for use during periods of dry weather and lower river flows.

Managing water resources is about much more than making sure farmers have enough water to meet their business needs. By using water efficiently, storing flood water and reducing run-off from the land, farmers work hard to help their communities to cope with extreme weather events and to improve their resilience to disruptions in water supply.

Irrigation is the process of watering plants using a controlled amount of water at intervals when needed. Irrigation has been a central feature of agriculture for more than 5,000 years. It helps farmers to grow crops during times of less than average rainfall and has other benefits such as helping protect crops from frost in winter, preventing weed growth by only supplying water where it’s needed, and helping to stop the soil getting saturated.

What is water abstraction?

Abstraction is the process of taking water from a natural source, such as rivers, lakes or groundwater. Abstraction of water for all forms of irrigation is done under licenced authorisation from the Environment Agency.

In 2017 there were 21,818 members of the National Register of Sprayer Operators. Operators have to undergo training and pass a test which ensures they are competent in spraying crops accurately to ensure minimum impact on the environment. Also, 18,269 sprayers were certified under the National Sprayer Testing Scheme which includes an annual MOT test for the spraying vehicle to ensure it is working effectively.

Other practices such as planting flowers, plants or hedges along the edges of fields help to prevent nutrients that have been added to the soil or any pesticides sprayed on crops from making their way into watercourses through the run-off of water from the field. 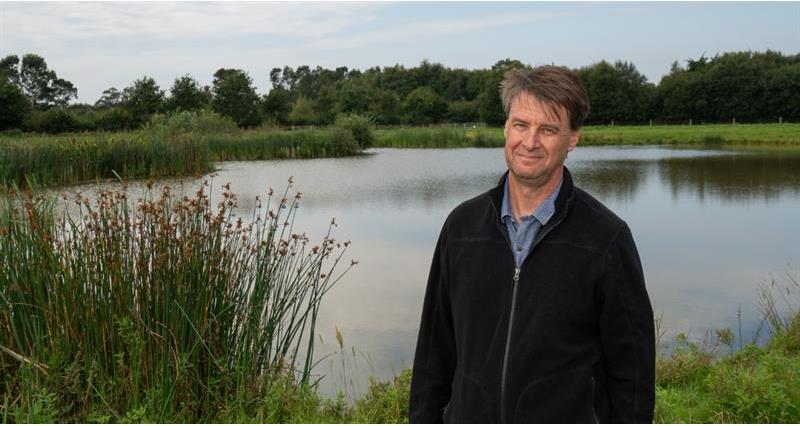 Horticulture expert Martin Emmett works with large-scale nurseries that grow plants for sale to garden centres and other retailers across the UK. They have taken a holistic approach to water management, capturing rainfall to recirculate and reuse, and in one instance, building a reservoir on site.

“This area has a problem with flooding and we’re alleviating a potentially significant flood risk,” Martin says. “The water that’s in the reservoir is a mix of water we’ve used previously and rainwater we’ve collected from the site. We take that water and run it through our irrigation system to water the plants. A certain amount of water still flows out of our site to a watercourse, but the majority we collect and pump back into the reservoir.

“We have an area of wetland habitat which we created as part of this project. When we’ve got a surplus of water because of heavy rainfall it goes into this wetland where we can store it before we pump it into the main reservoir. It’s quite a stable habitat and we also put in two islands which are good nesting habitats for birds.” 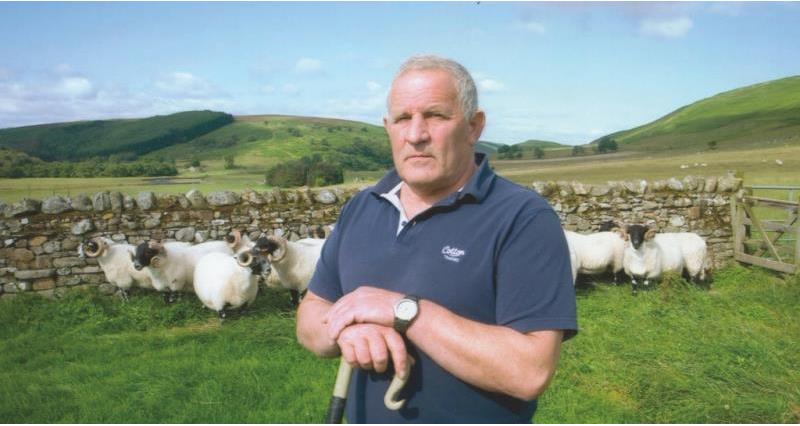 Northumberland farmer Graham Dixon has installed a series of ‘leaky dams’ on his hill farm near the village of Alwinton, controlling the flow of the ‘Hosedon Burn’, and helping to prevent flooding downstream.

The small wooden dams allow water to pass through them most of the time but when the water level rises to a certain point, they slow the flow and divert water onto the flood plain, rather than letting it continue downstream. His first 15 dams were installed in 2016 and put to the test during Storm Angus which hit during November of that year, bringing four inches of rain in 14 hours. 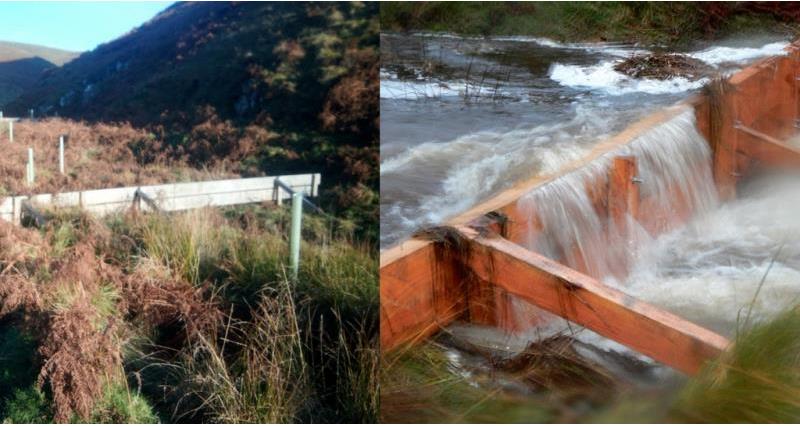 “There are a few houses in the village that flood frequently and the roads often get washed up,” Graham says. “The community couldn’t really do much, other than barricade their doors when the water approached. During Storm Angus, there was no flooding. We think we reduced the volume of water going through the village by almost a third.”

How can I do my bit to save water?

You can play your part all year round by doing a few simple things like turning off taps while you’re brushing your teeth, only boiling the amount of water you need in a kettle, and making sure your washing machine or dishwasher has a full load.

You can also steam vegetables instead of boiling them – or if you do boil, use the leftover water as a stock or let it cool and use it to water your plants. If you’re watering outdoor plants over the summer, water at the roots and do it early in the morning or at the end of the day to stop water evaporating in the heat. Buying British food and reducing the amount of food waste you throw away can also make a big difference.