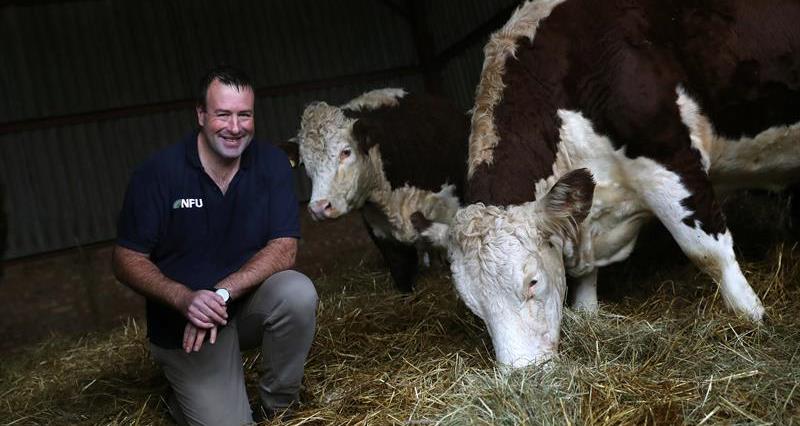 Stuart Roberts, Vice President of the National Farmers' Union and livestock farmer from Hertfordshire, explains why the sustainable meat production methods used in Britain are part of the solution to, not the cause of, climate change. He says:

In the UK, 65% of land is simply not suitable for other crops. Because of our climate we grow grass really well and the most efficient way to use this grassland for food is to graze livestock, which turns inedible grass into high quality, nutritious protein.

In addition, our extensive grasslands also act as a vital store of carbon, and grazing livestock helps grow and maintain organic matter and carbon in soils. Many arable farmers also use livestock in their cropping systems to increase soil health and fertility.

Watch our video to find out how cows and sheep help to manage valuable carbon stores as they graze:

In the UK our access to grass and forage means our livestock are grazed outdoors for most of the year without much need for supplementary feed or imported soya. In terms of water use, our wet climate provides most of the water needed to produce beef and lamb, with 85% of it being rainwater that falls on the grass they eat.

It is also important to understand that while livestock do emit methane, it is a short lived gas which breaks down after a few years. Research at Oxford University suggests that if we continue gradually declining methane emissions it would make no further contribution to global warming.

With our sustainable livestock systems and the wider industry acting as both a sink and source of greenhouse gas emissions, British agriculture is well placed to be a key part of the climate change solution.

Cutting out all meat and dairy is not the answer. Instead we should be asking where our products have come from and how they have been produced.

Climate change affects us all and in the UK we have some of the most forward-thinking, productive and innovative farmers who produce quality food while protecting the environment.

Get all the facts on British livestock production and see how British farmers look after the environment: