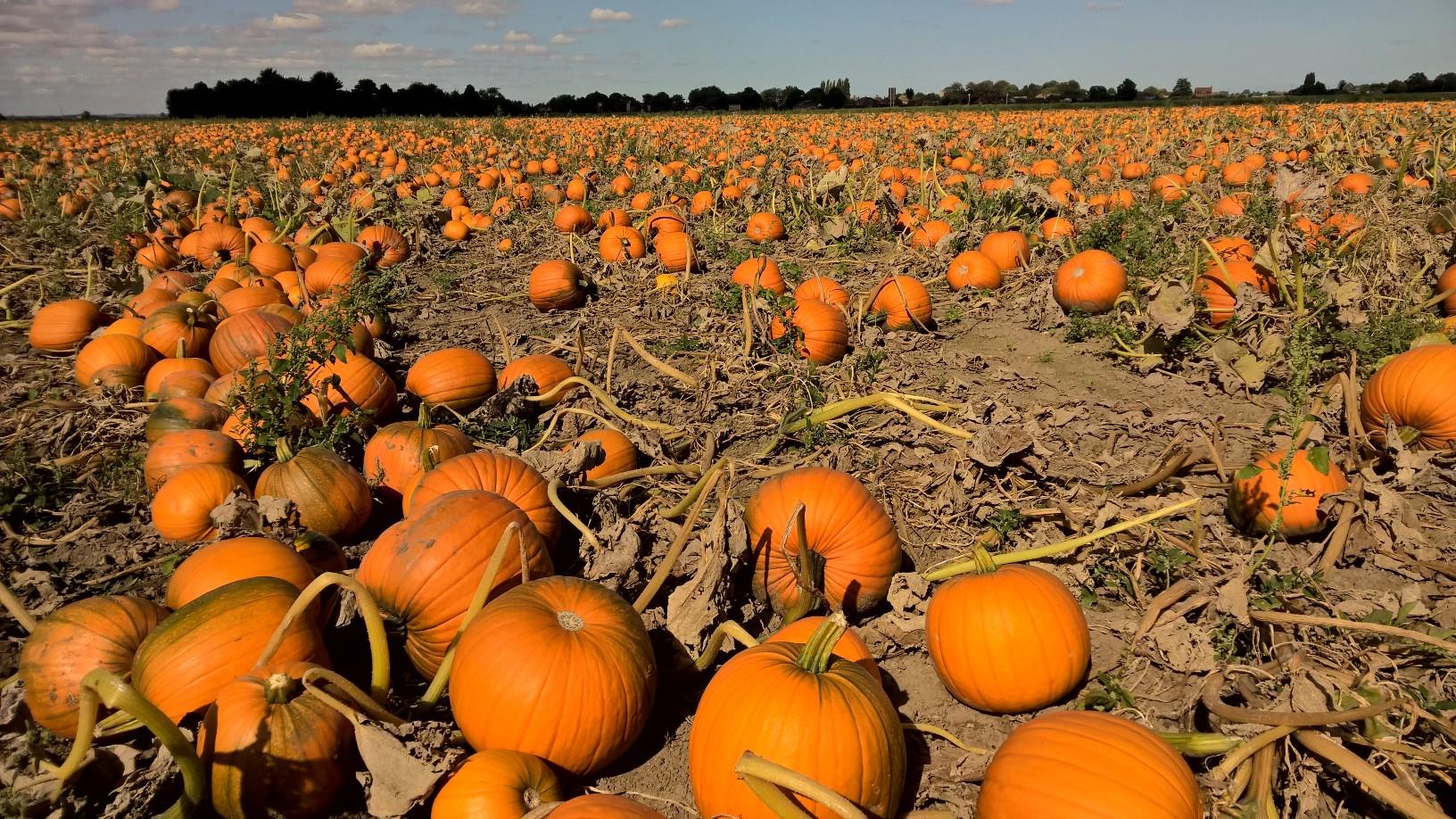 You only need to look at the changing colours of the trees to notice that autumn is upon us. With that also come the seasonal favourites and the annual pumpkin harvest.

With Halloween just around the corner, you’ll all be looking for the perfect pumpkin to carve and showcase on 31 October. But remember, pumpkins are more than just a decoration. They also make for a tasty meal too, so make the most of cooking with the seasons and your pumpkin carving fun with one of our tasty seasonal recipes:

Our farmers have been busy harvesting their crops since September and will continue until the end of October. It is estimated that an impressive 15 million pumpkins are grown in the UK each year. We’ve been speaking to several pumpkin farmers about all things pumpkin. 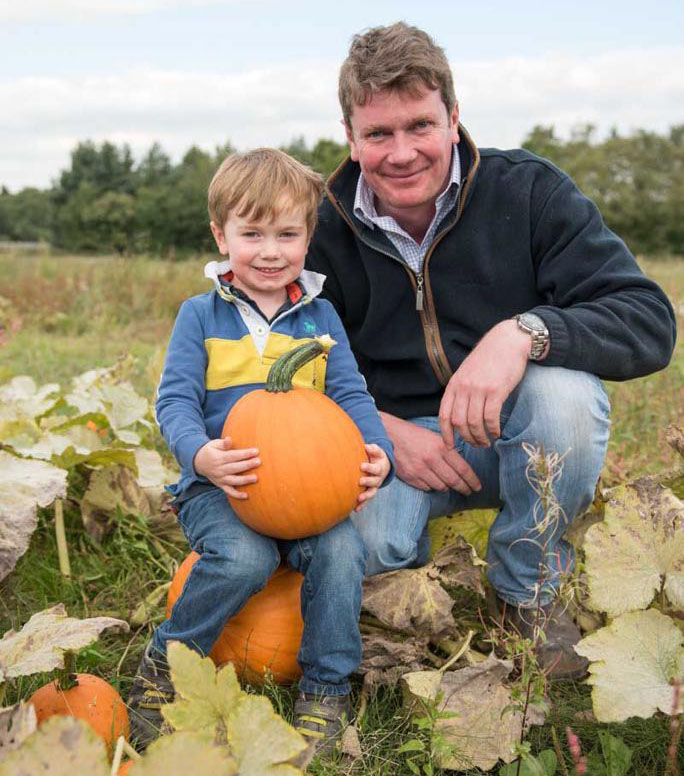 When do you sow the seeds? We planted them in May this year as small plants

When do you start the pumpkin harvest? Usually around the first weekend in October

How do you sell your pumpkins? We sell direct to the public, either from our farm shop or direct from our farms, were we take the tractor and trailer down to the fields for people to pick their own

Highlight of being a pumpkin farmer: I love seeing the families enjoying themselves, watching the children try and pick the biggest pumpkin possible.

Key challenges of a pumpkin farmer: Pumpkins are a hard crop to establish, being particularly susceptible to slugs. The weather is always a challenge, this year it was very dry when we planted them so we had to irrigate them. Also, trying to sell all pumpkins by 31st October can be a challenge; nobody wants a pumpkin after Halloween!

What do you do with left over pumpkins? We feed them to our pigs on the farm.

Quirkiest thing you’ve ever done with a pumpkin: Last year at our pumpkin carving festival we had a specialist pumpkin carver the flesh of the pumpkin into celebrity faces. 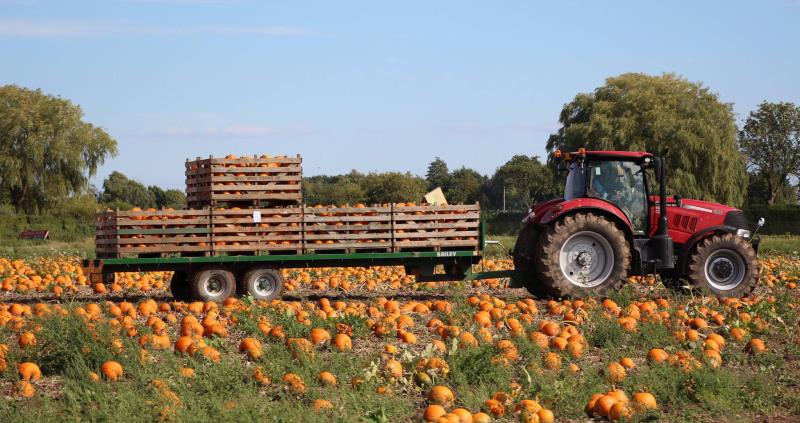 Bells Brothers Nurseries Ltd are situated in the heart of Lincolnshire, where they are lucky enough to benefit from excellent weather conditions. The Bell family have been farming in Lincolnshire for over a century, where they started with just a small greenhouse. Alongside several other crops and plants, the Bell family grow a staggering 500,000 pumpkins each year. Robert Bell of Bell Brothers Nurseries Ltd is up at the crack of dawn visiting each pumpkin field; the harvesting time of year is critical.

When do you sow the seeds? We sow in May and begin harvesting in September

What does a typical day look like? Pretty muddy! I like to visit each field first thing as the timing of the harvest is critical. Harvesting teams then start at 7.00am. We aim to lift 40,000 pumpkins per day, so it is pretty hectic! Every single pumpkin is picked and washed by hand so it's a very labour intensive task. The only mechanisation is transport from field to pack house.  The amount of labour varies during the process, at peak when we are cutting, lifting, processing and packing we have around 40 people. I also manage the production site to ensure that the washing and grading teams are keeping up with the harvesting crews.  Once we start to pack orders, the pressure is on to deliver what we have promised to our customers by Halloween.

Highlight of being a pumpkin farmer: My wife’s ever growing repertoire of pumpkin related recipes

Key challenges of a pumpkin farmer: Weather, handling and storage are the key challenges. Weather because it affects the yield and therefore the capacity to meet customer specifications and orders. Growing pumpkins is labour intensive. They are handled numerous times from the beginning of harvesting in the field to final packing.  All our pumpkins are washed and stored in glasshouses to provide protection and the required light to set and colour the skins.  We have to consider that the fruit’s natural propensity to bruising and rot increases each time it is handled and can greatly affect the final yield.

What do you do with any unsold pumpkins? Our local farmers use them as cattle feed

Quirkiest thing you’ve ever done with a pumpkin: Our unique 'Pumpkinsteins' (see below!)

Bell’s Gardening Outlet is hosting a Pick Your Own pumpkin patch in October as well as a pumpkin growing competition and weigh-off. For more information head over to their website. 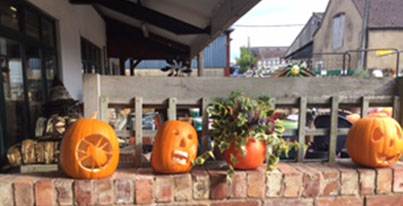 Pound Farm Shop and Plant Centre is a family owned business situated on the outskirts of the Cotswolds. Jenny and Gerald of Pound Farm, a 250 acre mixed farm, offer a wide range of home produced, from home reared turkey, beef, pork and lamb to seasonal vegetables to include pumpkins. For Jenny and Gerald, pumpkins aren’t just for us to enjoy, but the animals on the farm also enjoy a tasty treat too.

How many pumpkins do you grow? We grow half an acre worth of pumpkins

When do you sow the seeds? We sow around May and they are all now picked ready to sell

What does a typical day look like? It takes about 3 days to harvest all of our pumpkins. They are all picked by hand so the days are long and tiring.

Highlight of being a pumpkin farmer: Getting creative with the pumpkins. Last year the Tour of Britain passed by our farm shop, so I created a scene with bicycles and pumpkins. This year my theme is a vintage tea party, with flower arrangements and lots of pumpkin people.

Key challenges of a pumpkin farmer: The weather is the biggest challenge. This year has been quite a damp year, so we have had quite a few rotten pumpkins.

What do you do with any unsold pumpkins? Pumpkins that aren’t suitable to sell, and any unsold pumpkins get fed to the farm animals. The turkeys particularly enjoy pecking them and chasing them around the turkey paddock – they are good at keeping them entertained. My horse also enjoys them as a treat. 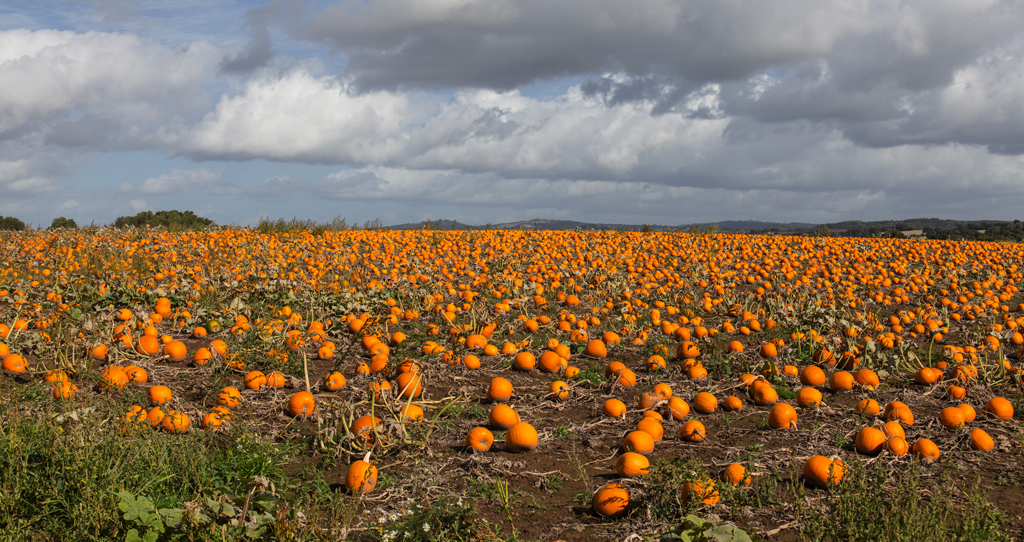 Dom Bloxham, a young farmer from Staffordshire, works on his family farm. As well as being a dairy farmer, Dom has diversified and grows 10 acres of pumpkins each year for the annual seasonal harvest. “With no two years the same, it’s difficult to predict how the next year’s harvest will be” said Dom. Dom is taking part in this year’s Lord Mayor’s Show to represent the industry at the parade, find out more here.

How many pumpkins do you harvest each year? It’s difficult to say how many but 10 acres - which is a lot of pumpkins!

When do you begin selling pumpkins? Mid October

Who do you sell to? We don’t supply supermarkets – we supply Halloween events and the general public

What does a typical day look like for you in the lead up to Halloween? Picking from the field for trade and tidying up the field ready for the public. On some days I can be picking 1,500 a day.

What is the best part about being a pumpkin farmer? As a dairy farmer too, it is a nice change from milking cows, and something seasonal.

What are the key challenges that you face? No two years are the same in terms of growing conditions and weed control

What is your top pumpkin carving tip? Don’t start with too large a pumpkin!

What is your favourite pumpkin recipe? Pumpkin muffins, though you also can’t beat a hot bowl of pumpkin soup

What is the strangest or quirkiest thing you’ve ever done with pumpkins? We once hollowed a huge one out to use as a drinks cooler, filling it with ice.

What do you do with any unsold pumpkins? As we also have a dairy herd, so the cows enjoy picking at them as the left overs.

Can you share some data on this? How has pumpkin farming developed on English farms? I always imagine other, more widely eaten, vegetables growing in Lincolnshire (peas and the like). Is there MAFF data on pumpkin crops that can be put on a mini-series graph or something like that? I would love to see that: how many was England's soil been sucked dry for back in the 1950s, 60s and so on? I only ask because I see the pumpkins of Halloween as an Irish thing - exported to the USA from Ireland then brought back into England with American movies: scary certificate 18 "Halloween" and then cert. PG "ET - Extraterrestrial" in the 1980s. After that the changes have been subtle: even BBC children's dramas adopting the ideas; seemingly stoking great news for single-use plastic costume makers and for those who simply cut up and smash/"trash" pumpkins without eating them. For my point of view, it's not what arable farming is meant to be about. We're here to feed people who need feeding.

I have a question I hope a sincere grower can answer. Can three (3) seperate different coloured pumkins be the same variety ? Deep Orange, almost cream, Yellow. Please help. A meal sepends on this. Thankyou.