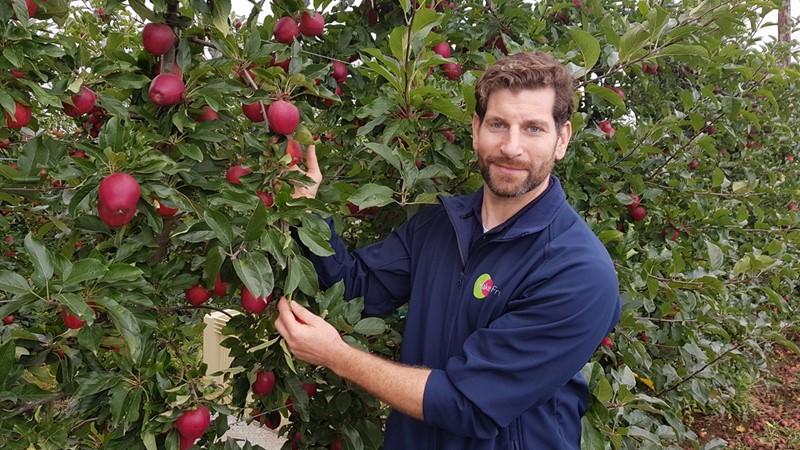 When English Apples and Pears held a launch day for the new season and a much-anticipated sustainability report, they invited interested parties to Boxford Farm in Suffolk – and for good reason.
Not only is it a successful fruit growing business, but it puts environmental concern at the heart of the business, with a whole raft of measures in place to mitigate climate change, encourage wildlife, and work with the wider community to improve the environment.
Third generation grower Robert Rendall says about 10% of Boxford’s capital spend each year goes on something green.
“We are particularly proud of the fact that the biomass wood-chip that we dry and use in the boilers that heat our glasshouses is bought from a local Woodlands Trust,” says Robert. “We have a fixed contract to buy it and they have been able to use that contract to raise finance to buy another area of woodland, which is a really lovely thing.”
Although the farm grows more than 20 varieties of apples, with Gala forming the majority of its crop, it also grows a range of soft fruits, including strawberries, raspberries, rhubarb, plums, blueberries, morello cherries in one of Britain’s oldest commercial cherry orchards, and even asparagus.
In the polytunnels, the strawberry operation has moved from ground-planted to tabletop and they’ve also shifted away from using peat to planting in coir instead. Even this growing medium is carefully researched.
“We do trials to mix our digestate with coir to improve the nutrient levels. It’s obviously better than peat. We used to grow in the soil, but it’s very labour intensive and backbreaking to pick strawberries, so we have moved to a tabletop production, which is much better for the pickers.”

A challenge for the farm is ensuring the orchards, greenhouses and polytunnels have sufficient water, no mean feat when you consider how much fruit they are growing over several sites, but Robert is proud of the fact that the farm is self-sufficient in water.
“My grandmother was so ahead of her time, the irrigation system here was the largest private irrigation system installed in Europe in the 1950s. Because she had come from Israel, she understood the need for irrigation. Now it’s very common among apple growers to have drip irrigation, but we have been irrigating our crops since the fifties.
“We collect rainwater from the roofs of the cold-store buildings and the glasshouses and the reservoirs, and store it in our reservoirs, so we are self-sufficient in water and don’t need to abstract any more.”
One of the biggest investments for the business has been an anaerobic digester (AD). “We have now spent about £5.5m on the project, it’s a steady income, and relatively low intensity in managing it – just three or four members of staff – and it takes out a waste stream that is effectively a cost, and turns that into an income.

“The great news story is we generate green energy – not quite net zero as any energy has a carbon footprint, but it’s a lot lower than fossil fuels. It’s lovely to be able to produce enough green energy to offset our entire energy consumption.”
Methane biogas generated by the AD is used to supply electricity and heat to the farm, as well as electricity to Copella, the neighbouring juicing operation. The Copella brand was originally owned by Boxford, but was sold to PepsiCo, although the farm still supplies their apples.
And, in a perfect circle of life, it’s the apple pomace, dry matter left over after juicing, together with any apples not suitable for juicing that are used in the AD to produce the green energy used to heat and light the farm’s buildings.
“We have two engines totalling a megawatt that feed our cold stores, the Copella factory and our farm buildings,” adds Robert. “We also pipe gas to the nearby Stoke-by-Nayland Hotel and are able to provide all the gas the hotel needs. We also have solar PV on our cold stores and the hotel roof and some of the farm buildings, too.”
Producing green energy on-site has been a win-win for both the farm and the surrounding community. As well as saving costs, it has significantly reduced the carbon footprint on the farm. There is much less movement of materials on, off and around the farm, as everything is used on-site and local villages have benefited from a reduction in traffic and pollution, as well as the increase in job opportunities.
Robert concludes: “As a business, we already produce more green energy and recover more water than we use and it’s our goal to be a carbon sink (an environment that absorbs carbon dioxide from the atmosphere) by 2027.”

Raymond lives by the seasons 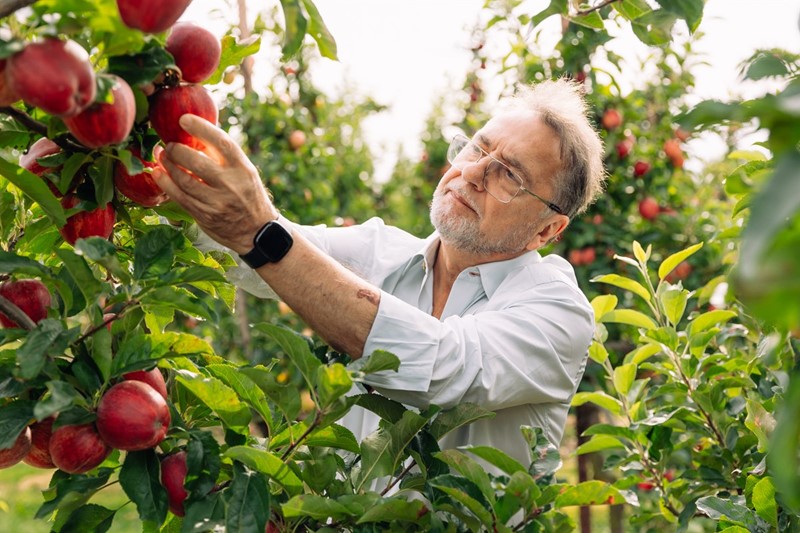 Celebrity chef Raymond Blanc may be French, but he is passionate about buying British and local, whether it’s beef or lamb for you dinner menu, or apples and pears for the fruit bowl.
This is the second year he has lent his name to the launch of the British apples and pears season, and urges everyone to add them to their shopping list while they are in season.
“Britain produces some of the finest apple and pear varieties in the world, and it is hugely important to me that we support our home-grown produce. With so many wonderful varieties available this season – in an array of beautiful colours, textures and flavours – there really is a British apple to delight everyone.”
Raymond says the ethos of buying local foods can be found in the teachings of his mother in France, who loved to grow her
own food.

“It goes back to my childhood when my mum told me first: ‘Raymond, you shall waste not’. We were working class people, but we had a huge garden to grow what we needed. She was a farmer’s daughter who taught me all the basic things about farming and growing food. Food is an act of love and she is a foundation of all my values.
“So, when I came to England 35 years ago, it would have been easy to import French products, because some of it was better. But I didn’t want to go down that route. On the contrary, I helped farmers grow their produce and we worked together to achieve the quality I was looking for, and I have taught these working practices to my young students.”
Raymond believes that consumers are looking for more from their food these days; price isn’t always the key factor when buying their weekly shop, although value is still important.
He says: “For a long time there has been a consumer society where there was a push of cheap food, but now we are moving into a different era. It has taken a while, after all, revolution takes time. Now we are at the point where we are connecting with our food, with our farms, with our values, and I think it is exciting, with lots of possibilities.
“I believe the consumer, in general, is much more knowledgeable and aware – and knowledge means empowerment. More and more we are entering a future of people who are much more responsible, much more aware and that’s exciting. And I see orchards expanding to try to grow new food products.
“For example, when I came here 35 years ago immediately I tried to grow some food that is grown in France, but it was a great failure. I had some successes, though, and lemongrass was one of them. It was a plant that grew at altitude in Kilimanjaro, but I was able to grow it here. It’s about looking outside the box and pushing boundaries. But what I am looking for most is flavour – at the end of the day, for me it’s about taste.”

Raymond famously grows much of the herbs and vegetables for his Michelin-starred restaurant Le Manoir aux Quat’Saison and is excited at the prospect of now expanding his gardens.
“I have my own vegetable garden, which I am tripling in size, I have one and half acres now and I am adding three acres. I want to grow all the main crops like onions, garlic, potatoes – all the crops that are easy and don’t need too much attention. Then I want to grow more of the specialist crops too.”
“I have 12 gardens at Le Manoir, including a mushroom garden, water garden, Japanese teahouse garden, potager, medicinal herb garden, micro herb garden, and orchards. I simply love gardens. My gastronomy is born from the canvas of my garden and as much local produce as possible.”
He maintains that anyone can grow their own, whatever size of garden they have. “Even if you start with a little box on the windowsill and plant a few herbs, you will be amazed,” he smiles. “If you are starting out, spinach is easy to grow, and basil is very easy on a windowsill or outdoor with a bit of sunshine.
“You can show your child the magic of that little brown seed that can grow into this beautiful food.
“It’s important to teach our children about the environment, about food and where it comes from, and provenance and taste. There is a craft of growing food and we need to pass that to the next generation.”
And what about Christmas? Any tips for cooking a great festive dinner? “Just make sure you use fresh seasonal produce. Everything I do is defined by seasons, it’s as simple as that.” 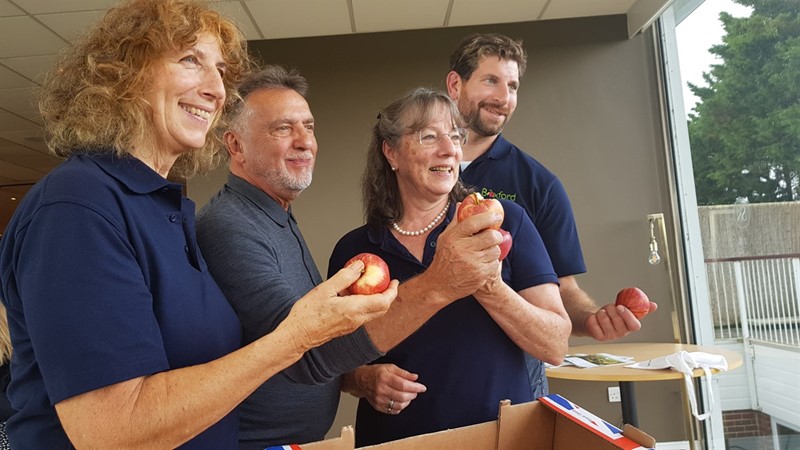