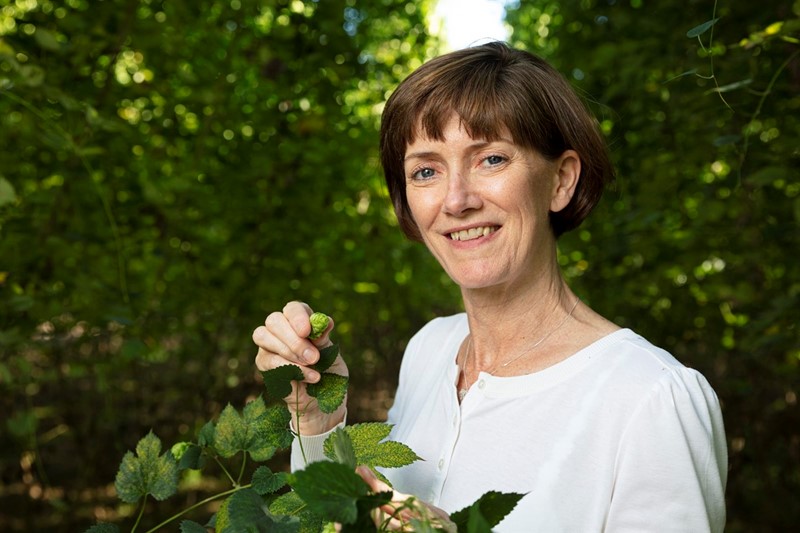 Who doesn’t love to see row upon row of blossoming apple trees in the countryside in spring, or branches laden with juicy fruits come the autumn? But growing this type of crop comes with its own unique set of challenges, especially when farming with the environment in mind.
Apple and hops growers Richard and Ali Capper know this all too well as they strive to implement measures on her Worcestershire farm that will benefit nature, but also ensure the crops of apples and hops thrive and produce top quality fruits and flowers.
The main issue for Richard and Ali, and other top fruit growers, is their crops result in a monoculture, and it’s this lack of biodiversity, along with the complex issue of soil health that they are going above and beyond to address.
The team has implemented a series of projects on the farm to prevent soil compaction, encourage worms, introduce natural predators and to plant wildflower strips to boost pollination.
Ali explains: “Soil compaction is not good because if there is no air going into it, the worms don’t like it, and if you haven’t got worms, you haven’t got good soil health.
“So, towards the end of the growing season in late September, we use a shakaerator. It doesn’t turn over the soil, it’s a metal implement that goes into the soil and loosens it up through vibration.
“We don’t do this in every orchard every year, probably every other year, but it’s a great way to free up the soil and improve drainage.
“We also look at anything we can do to travel on the soil less often, so less spraying, less movement. There are certain pests that are always going to be there and, if you grow one crop, they will love it because their food is all there in one place.
“In apples, there are certain moths that are a problem – they will ruin the fruit – so one of the things we do, rather than just spraying at the time of year they emerge, is to put out moth traps and only when they have a reached a threshold number, do we then go in and tackle them.”
This cuts down on the amount of heavy machinery travelling up and down the apple rows, so reducing soil compaction.
And another method used to deter the moths is a small disc that is hung throughout the trees called a mating disrupter, which sterilises the male, reducing the population, and therefore, the need to actively intervene.
Another change that has made a difference is the introduction of new machinery for harvesting. “In the old days, to pick the tops of the trees you used ladders, but we can’t do that anymore as it’s a health and safety nightmare,” says Ali.
“We introduced picking platforms that were towed by a tractor. This meant we had people on a heavy trailer, along with the bins and a heavy tractor pulling it, steered by someone who drove rather than picked the fruit. So, a few years ago, we invested in two picking platforms. They are quite lightweight, but you can still put a team and bins on top and it’s self-propelled with a little steering wheel that’s controlled on top of the platform.
“This means once it’s steered to where it should be, the person can then pick and, more importantly, it means no heavy tractor –  so less compaction.”
One of the projects that Ali is most excited about is the planting of wildflowers to improve biodiversity, something that is already having a positive impact.
Planting wildflowers on unused headlands in field margins is straightforward for farmers who have traditional fields with large headlands, but for apple orchards and hops, space is limited.
“It’s more difficult for us because our headlands are not that big and the headlands we do have, we need to be able to travel on,” says Ali. “So, we started looking at ways we could put wildflowers into the crop. Coming back to the compaction issue, we bought a three-row sprayer. It sprays three rows but only travels on one. It’s got arms that come out over the top and it then folds up to come back. This machine means we are only travelling on one in every three rows, so when we bought the sprayer, I persuaded Richard that we should sow wildflower seed, which is much more expensive than grass seed, in every two out of three rows, leaving a grass row for the sprayer to travel on.

“Wildflower maintenance is much harder work than grass – you have to manage it. We are on the edge of ANOB, so we have been going to traditional wildflower meadow talks to understand the impact of mowing and when to mow. You do have to mow them to maintain them.”
The two rows of wildflowers and one of grass have been implemented in all the orchards planted in the past four years. “We have planted a lot now, so the question is: do we go back into the old orchards and introduce the system there too?” says Ali.
“No one is paying us to do this, we just think it’s right thing to do. Getting the wildflowers in there is also about increasing the biodiversity. We want the maximum number of pollinators in there because that means we are going to get a good crop. It’s not just about yield, but also quality – the quality of the pollination is important. The quality drives how many seeds you get in the apple – seedless apples are poorer quality.
“Also, we are attracting more predators that will reduce some of our pests naturally, rather than having to spray with fungicide.”
The proof that the planting of wildflowers is having a positive impact can be seen in the increasing number of beehives now situated around the farm. “We have really increased the number of hives and because of what we are doing now with the wildflowers, where the beekeeper used to come and take them away for winter, he is now leaving them as the biodiversity has increased and there is enough food source to keep them going all year round.” 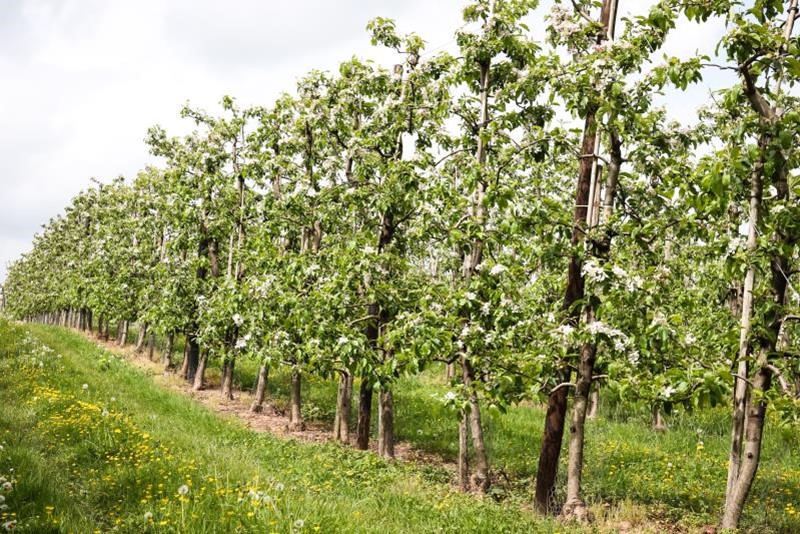 As well as growing eating apples for supermarkets, Ali also grows hops and these throw up some very different problems. Hops are prone to a disease called Verticillium wilt, which lives in the soil. There is no cure; the only thing is to stop growing susceptible hop varieties for seven years and leave the ground fallow. Over the years growers have bred their way out of this situation, and Ali grows crops that are either tolerant or resistant.
“We do have wilt in the soil, but we cope,” says Ali. “The agronomic practice over decades to prevent Verticillium wilt was to keep the soil bare in the winter, as any broad leaf plant or weed can be a host, but this is bad for soil health, especially when it rains and this can lead to the leaching of nutrients.
“So, we started a cover crops project about five years ago and got an agronomist involved. The idea is to see whether growing certain cover crops in the winter months will help prevent soil erosion, without impacting on the hops yield and quality. There were four growers to start with, and on this farm we planted cover crops in a couple of rows in one hopyard in the first year. The next year, we planted a couple of yards and the third year attempted to do the whole hop crop area, but didn’t manage it due to the timing and the weather, so the crop wasn’t established well.
“Last year, we cracked it. We spread our seed before harvest in the middle of August and it was sitting there, not doing anything, shaded from sunlight by the hops above it, but as soon as we harvest, it gets the light, the soil is still warm with a bit of moisture and off it goes.”
Ali says this is all part of a trial and they are still learning. The next thing to tackle is how to include a more diverse cover crop, without encouraging more wilt into the soil, and the best way to remove the cover crop in the spring.
“Some growers are putting sheep in the rows and one of the things a grower tried last year is to go through and break the base of the stem and lay the crop down as a green mulch, so we will try that next,” says Ali.
One easy win from the hops is to use the waste from the hop crop as a mulch for the orchards to prevent transpiration during the summer. “Instead of bringing in green waste from miles away, we are using our own waste, the stems and leaves from the hops, and we allow it to compost down over winter and use it as a mulch in the following spring.”
There are other measures being put in place, including using a predatory mite – amblyseius andersoni – to get control of spider mite, a real problem pest for hops, and a project Ali is hoping to get funding for to establish the best cover crops for soil health and diversity for hops.

Looking to the future, Ali says she would like all their tractors to run on renewable energy and would like to install solar panels where possible.
“Then ultimately, in the future, it’s about bringing in robots, ideally solar-powered, meaning we would need fewer people, which would make us more efficient,” says Ali. “From a climate point of view, if we had solar-powered robots it would save a great deal in fossil fuel use.”
And on farmers achieving net zero by 2040, an ambitious goal set by the NFU that is 10 years ahead of the national target, is this achievable?
“Can we achieve net zero by 2040? It’s quite a big ask, but in a perennial cropping system like ours, with enough renewable energy and innovation, anything is possible.”