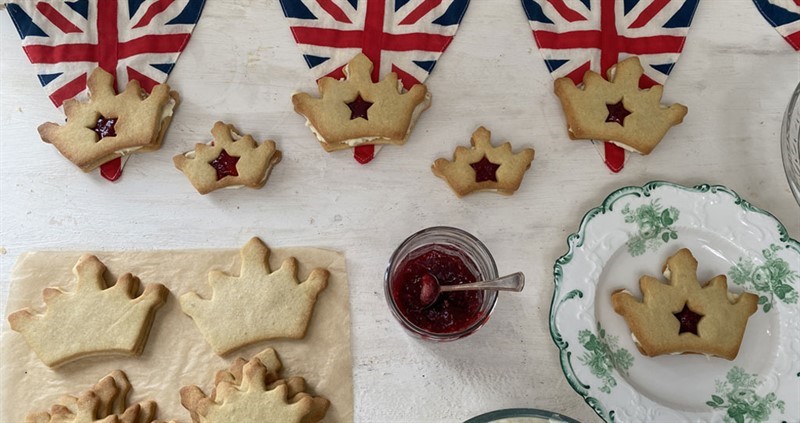 Quintessentially British and a biscuit that has reigned in this country for a similar time to our Queen, what could be more perfect to celebrate the Platinum Jubilee than a jammy dodger?

I have added a layer of vanilla buttercream and stuck to traditional jewel-coloured raspberry jam, but ring the changes and use lemon curd, blackcurrant jams or homemade favourites. This makes a big batch for a street party, picnic or just so you have plenty to share. The recipe can be halved if you want to make less.

A rolling pin, some crown, corgi or flag cutters, or use a round cutter, a flat baking tray, non-stick baking paper

For the biscuit dough:

Cream together the butter, icing sugar and vanilla extract until smooth and creamy.

Beat the eggs and add to the mixture.

Add the flour, and mix gently until combined, then bring the dough together with your hands.

Shape the dough into two flat discs and wrap each in non-stick baking paper.

Put the parcels of dough into the fridge to rest for about an hour.

Roll out the dough between two pieces of baking paper or with a dusting of flour to the thickness of a pound coin.

Cut out into shapes then carefully lift onto flat baking trays lined with non-stick baking paper.

Use a small, shaped cutter to make shapes of stars, hearts, flowers or crowns in the middle of half of the biscuits.

Put the biscuits on their trays in the fridge to rest for about an
hour before baking them. This should stop them from spreading in the oven.

Preheat the oven to 180 degrees and put the biscuits into bake for about 15 minutes until pale golden on top.

Leave them to cool on the trays – they will harden as they cool.

Put the butter, icing sugar, milk and vanilla extract into a bowl, beat together for about 2-3 minutes until creamy and smooth.

Dust with icing sugar, pile onto a plate and proudly share at your Jubilee celebrations this summer.