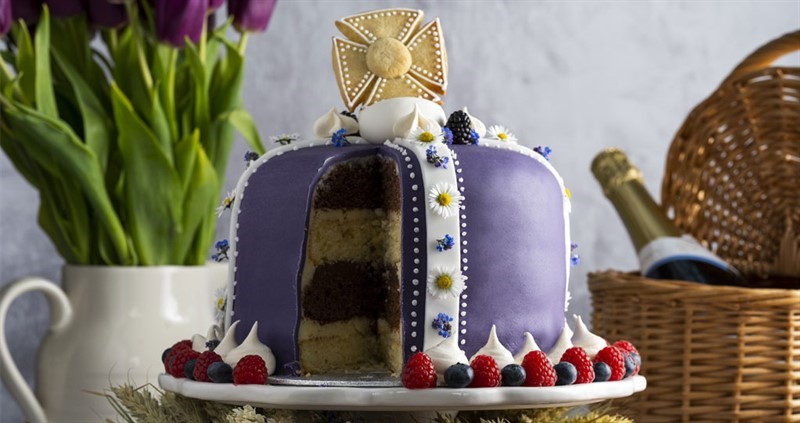 A Jubilee showstopper of a cake, this chocolate and vanilla layered crown cake is decorated with homemade meringue kisses and summer berries. It would be lovely as a centrepiece for your Jubilee celebrations this summer. I hope you have fun baking it together!

For the milk chocolate ganache:

For the meringue kisses:

Follow the recipe here or buy some ready-made meringue kisses.

The ganache: First make the ganache as this takes at least five hours to set, sometimes longer.

Put the chocolate and cream into a heatproof bowl over a pan of simmering water. Keep a close eye on it and stir gently. Once the chocolate has melted, remove from the heat and beat well until smooth and shiny, using a wooden spoon.

Place in the fridge for around five hours to set.

For the meringue kisses: Preheat the oven to 120 degrees. Line a large baking sheet with non-stick baking paper

In a clean bowl, whisk the egg whites until stiff peaks form. Mix at high speed and add the granulated sugar a tablespoon at a time, whisk after each addition until smooth and glossy.

Turn the speed down and sprinkle in a tablespoon of the caster sugar, whisk again and keep adding a tablespoon at a time until the mixture is shiny and smooth.

Spoon into a piping bag, snip off the end to make a hole big enough to pipe little meringue kisses onto the baking tray.

Put into the preheated oven for about an hour, leave the door closed and switch the oven off with the meringues inside for another hour, or overnight if that is easier.

Preheat the oven to 180 degrees.

Cream together the butter, sugar and vanilla extract until pale and fluffy.

Beat the eggs in a jug and add to the mixture a little at a time, beating well after each addition. Add a tablespoon of flour if the mixture looks to be separating and not combining well.

Sift in the flour and baking powder and fold in gently with a spatula.

Add the milk and gently fold into the mixture.

Line two tins with non-stick baking paper and lightly grease the sides of the tins with a little vegetable oil on some kitchen roll.

Scrape half of the mixture into the two lined cake tins; bake in the preheated oven for about 20-25 minutes.

Melt the chocolate and add to the remaining mixture with the sifted cocoa powder; fold in gently.

If you have two more cake tins then use these, otherwise wait for the other cakes to bake, leave them to cool in their tins for about 10 minutes before carefully turning out onto a cooling rack. Rinse the tins in cold water, wash gently and then grease and re-line before adding the chocolate mixture. Bake as the vanilla cakes above.

For the vanilla buttercream:

Once the cakes are completely cold, trim the top of three of the cakes and leave the most domed one to use at the top. Use a little of the buttercream to stick the first cake onto the cake board or stand, add a layer of buttercream, then gently press on the next cake.

Top the next layer with chocolate ganache and then add the next cake and more buttercream.

Use a sharp knife to slightly shape and dome the top of the cake.

Spread the whole of the top of the cake and sides with a thin layer of buttercream – this will help the rollout icing to stick on.

Leave the cake to cool for at least two hours, this will make it firm enough to decorate.

Use the recipe for the Jubilee Jammy Dodger biscuits, make a simple template for the cross patty (the cross on top of the crown), cut out with a craft knife. Make a small ball of biscuit dough and press this into the middle. Bake as the instructions and leave to cool on the baking tray (it may need longer to cook than the crown biscuits as it is thicker).

Fill an icing bag with the royal icing and use this to pipe the decorations on the biscuit, to stick on the white rolled out icing, to pipe icing dots and to stick on the edible flowers.

Roll out the purple icing with a little icing sugar on the worktop and use the rolling pin to carefully lift this over the cake. Use your hands to gently smooth and sculpt it on to the cake.

Roll out the white icing and cut two long strips (each about 2cm wide), pipe a little icing onto the cake and then stick the two strips on to make the white part of the crown.

Make a ball out of the white icing, cut a small slit in the top. Squeeze a little of the royal icing into the slit and press the cross-shaped biscuit into the gap. Prop it up with a little cocktail stick until the icing sets. Once the cake is iced, place this on top.

Add the edible flowers. I used forget-me-nots and daisies and piped-on dots of royal icing to stick them onto the cake.

Decorate around the base of the cake with the meringue kisses and berries. Use a little of the buttercream or royal icing to stick them in place.

Put a few of the remaining meringues and a few blackberries on the top of the cake, using some of the royal icing to stick them down.