Food and Farming - Protecting the environment - How are British farmers improving soil health? Billy Lewis and his parents farm 350 acres at Boycefield farm in Dilwyn, Herefordshire and are passionate about improving their soil health.

The family farm 45 pedigree Hereford suckler cattle and followers, 300 sheep and an area of cereal crops. Around half the farm is made up of permanent pasture, with the other half in what is normally a 6 year cropping rotation. This includes a rotation of winter wheat, winter oats, spring barley and grass which is used for grazing and silaging.

The family has made great strides in their path towards regenerative agriculture by placing a huge emphasis on soil health, which they hope will help to reduce, or even eliminate, the need for artificial fertilisers. They're specifically working towards making their soils biologically active, which means the soil is more productive.

"The driving force behind much of our decision making now takes into account the impact that certain actions may have on the health of our soil."

So, what are the ways they're making that all important soil healthier?

It's important to have a constant and diverse system of living roots in the ground which feeds the soil and increases organic matter and soil carbon. Soil organic matter improves soil structure, which helps to control soil erosion, improve water infiltration and water holding capacity, which in turn gives plant roots and soil organisms better living conditions

To achieve this, the family plant a catch crop of mustard, buckwheat and phacelia straight after harvesting their winter wheat. Catch crops are a fast-growing crop that can be grown between successive main crops to provide soil cover, organic matter, rooting structure and in certain circumstances provide some livestock grazing.

Winter Oats are then direct drilled into the standing catch crop in October time. Once the oats have been harvested the following summer, they then plant a diverse 8 way cover crop over winter, which is grazed by ewe lambs before being planted with barley in the spring.

They have also experimented with growing cereal crops in a clover living mulch, by direct drilling wheat into existing clover. The clover not only offers a nitrogen source to the wheat but also forms a symbiotic relationship with it, again helping feed soil biology and pump carbon into the ground. With livestock comes manure, and with manure comes a great tool to help manage soil health. The family keep manure in a covered muck store over winter, then take it out and place it in windrows (a row of cut hay) in late spring when they begin the composting process.

Keeping the manure in the store over winter prevents any nutrient loss and means it doesn’t become saturated by the rain which causes it to turn anaerobic. Later, when turned into compost, it is full of beneficial microorganisms that support the soil. 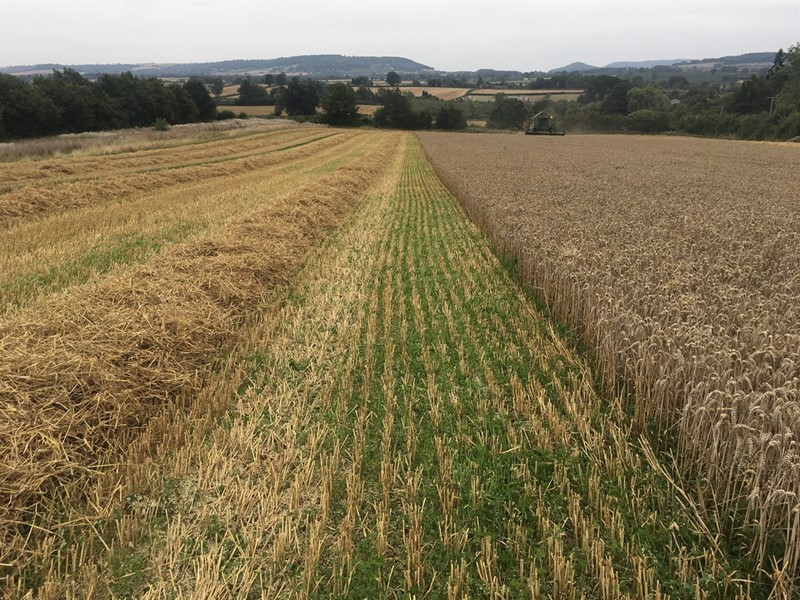 On the livestock side of the business, the family use a mob grazing system for their cattle and sheep. Mob grazing involves moving cattle at least daily between small paddocks, sized to match the number of cattle, and split by portable electric fences. It is beneficial because the grass is allowed to grow longer, before getting eaten down. Once the cattle are moved on to the next patch, the ground has longer to rest. Not only that, but the cattle get to enjoy lush grass.

The effects of mob grazing on the soil and livestock became quickly apparent. The animals are healthy and happy, as they know they’ll be receiving fresh grass every two days.

"You can see the properties of the soil changing in front of your eyes. We’ve found that a truly regenerative farming system cannot be achieved without the incorporation of grazing livestock."

Herbal leys, which are temporary grasslands made up of legumes, herbs and grass species, have allowed the family to grow lots of grass for their animals to graze on and that can be used to produce plenty of silage without any nitrogen fertiliser. The deep rooting nature and nitrogen fixing properties have been a huge benefit to the soil.

While alive and active, roots redistribute carbon and nutrients throughout the soil which benefits soil fertility and carbon storage. Ultimately in time maintaining a healthy, biologically active soil will help insulate against volatile markets, weather conditions and political demands placed upon farmers heading into the future. Simply tweaking an existing system can give way to a much more exciting and profitable way of farming.