Food and Farming - Protecting the environment - How are British farmers helping to tackle climate change? Cows and sheep are often in the spotlight when it comes to discussions around climate change.  There is always talk about greenhouse gas emissions from livestock, however there are many environmental benefits that come from grazing livestock. 65% of UK farmland is best-suited for growing grass and grazing livestock and cannot be used to grow other types of food. These grasslands are an important store of carbon because, as the plants grow, they take carbon dioxide out of the atmosphere and store it as carbon in the soil. British cows and sheep are predominantly grass-fed, and by eating this grass and fertilising the soil, beef and sheep manage the grass and protect these valuable carbon stores.

There are also examples where livestock are critical to the lifecycle of wildlife. For example, the grazing regime of cows and sheep help to create ideal habitat conditions for the rare Large Blue Butterfly. 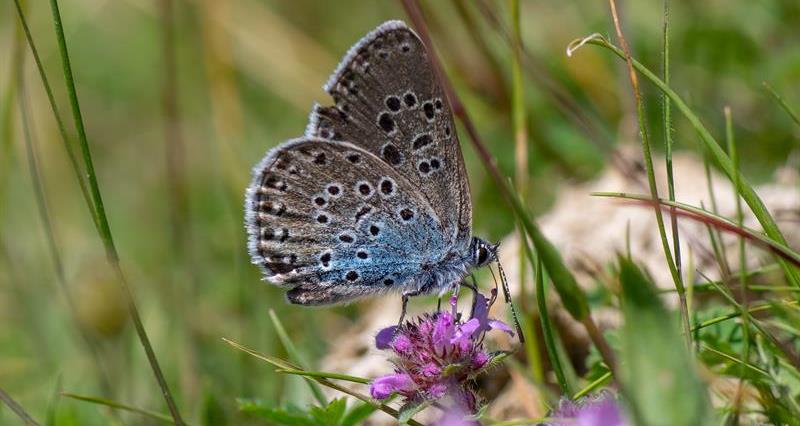 How are livestock farmers helping to tackle climate change?

Beef and sheep farmers across the UK are embracing a diversity of practices which both reduce greenhouse gas emissions and enable them to be better prepared for the impacts of a changing climate. Read more in British Livestock and Climate Change: Beyond Meat and Methane.

Livestock farmers are also helping to deliver clean energy from the land. Read about the amazing people doing this in Delivering Britain's Clean Energy from the Land.

How are dairy producers helping to protect the environment? 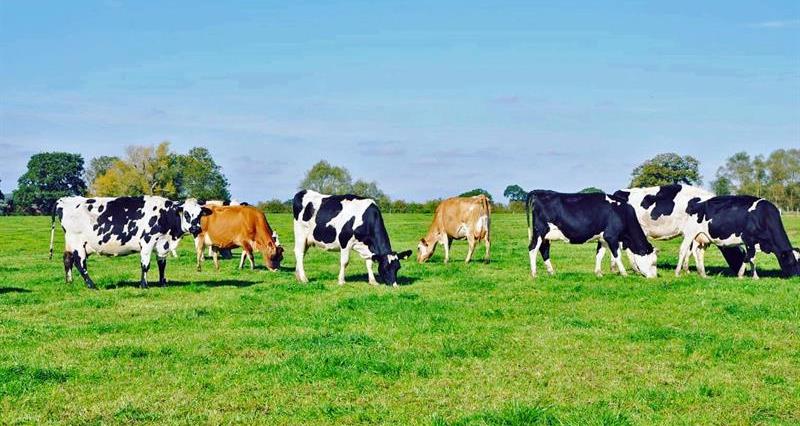 Dairy farmers take great care and pride in protecting the environment using many methods, such as responsible use of fertilisers and careful management of hedgerows to allow wildlife to flourish. The Dairy Roadmap, an industry-led initiative, has also set environmental targets for the UK dairy industry for 2020 and 2025, from farm to retail, and outlines where the sector is in reaching its targets.

British dairy farmers have worked extremely hard over the past decade to reduce their environmental footprint and as a result greenhouse gas emissions from UK milk production have declined by 24% since 1990. This has mainly been through improving energy efficiency, optimising on farm productivity and investment in renewable energy.

43% of dairy farmers currently produce or use renewable energy through methods such as solar PV panels, wind turbines and anaerobic digestion. The majority of dairy farmers also undertake nutrient and manure management plans to minimise water pollution, as well as regularly testing the soil for nutrient content and pH level.

How are upland farmers playing their part to tackle climate change?

Alongside producing food, caring for the environment is a central part of the work of an uplands farmer and they have been maintaining and enhancing Britain’s iconic landscape for generations.

Upland peat soils and blanket bogs are the largest stores of carbon in the UK, holding around 200 million tonnes in England’s uplands alone. Farmers’ efforts to protect these habitats are ongoing through sustainable grazing, avoiding erosion, and managing wildfire risk, which helps protect the carbon locked in peat soils.

70% of the UK’s drinking water is sourced from the uplands and best farming practice enhances water quality at the source rather than relying on expensive treatment units. Upland farmers are also key to ‘slow the flow’ initiatives, helping to reduce the impact of flooding in high rainfall periods.

Find out more about upland farming - Uplands farming: the facts

Find out more about peatlands - Peatlands and farming

How do British growers look after the environment?

British growers are proactive in encouraging biodiversity, such as planting shrubs and plants to attract bees and other insects and pollinators, creating habitat for them and putting up nesting boxes for birds.

Many growers also collect rainwater for irrigation and recycle water by filtering and purifying with UV light, as well as diversifying into renewable energy, producing electricity, heat and transport fuels.

Biofuel - A fuel derived from renewable, biological sources, including crops such as maize and sugar cane, and some forms of waste.
Carbon footprint - The amount of carbon emitted by an individual or organisation in a given period of time, or the amount of carbon emitted during the manufacture of a product.
Climate change - A pattern of change affecting global or regional climate, as measured by yardsticks such as average temperature and rainfall, or an alteration in frequency of extreme weather conditions. This variation may be caused by both natural processes and human activity. Global warming is one aspect of climate change.
Deforestation - The permanent removal of standing forests that can lead to significant levels of carbon dioxide emissions.
Global warming - The gradual increase in global average temperature.
Greenhouse gas - A group of gases that, due to their chemistry, trap heat and warm up the Earth’s climate via the greenhouse effect.
Greenhouse gas emissions - Releasing any of these greenhouse gases into the air is known as greenhouse gas emissions, sometimes shortened to GHG emissions.
Greenhouse effect - The process where greenhouse gases in the atmosphere trap some of the sun’s heat and stop it radiating back out to space, making the planet warmer than it would be otherwise. Like an insulating blanket around the planet.
Net zero carbon - Net zero carbon means that some carbon is emitted, but only an equal amount to what is absorbed, so the net effect is carbon neutral. A good example is burning wood for energy: it emits carbon, but only the same amount as the trees previously absorbed when they were alive.​
Soil carbon - The amount of carbon stored in the soil