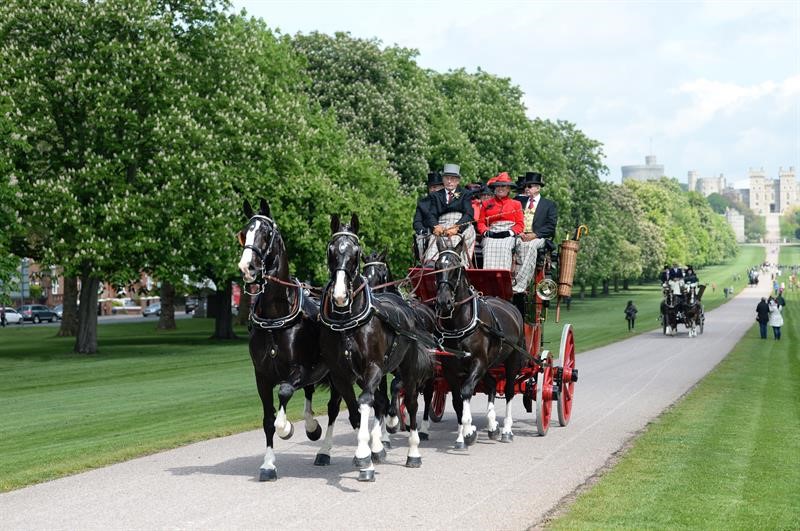 It has been said, allegedly by the Queen herself, that ‘had she not been who she was, she would like to be a lady living in the country with lots of horses and dogs.’ And it is perhaps this deep (and very private) connection to the countryside, natural world, and the four-legged creatures within it, that has allowed HM Queen Elizabeth II to endure in body, mind and spirit to the grand age of 96.

This year marks The Queen’s 70 years on the British throne, making her the nation’s longest serving monarch; and, unequivocally, one of the most adored and respected sovereigns in history.

Hugo Vickers, royal biographer and commentator, says: “The Queen is very grounded, is a true country woman at heart and likes anything in the open air. The general public has no idea really – they create these tabloid images of the royals and they’re so different in reality.”

At a glance, the Queen would appear to be one of the largest landowners in the country, if not the world, however, on closer inspection it is the Crown Estate, an independent organisation, which owns and manages most of the assets connected to the monarchy.

The Queen owns several estates in her own right, notably the 20,000-acre Sandringham Estate in Norfolk and the 50,000-acre Balmoral Estate, in the Cairngorms National Park, Scotland, both of which she inherited. Her personal estate are places of sanctuary, as is Windsor.

The Queen’s only daughter, the Princess Royal said in an interview in 2020, “Scotland had its influence on my mother… as did the big skies of Norfolk, and the huge fields and marshes of the Sandringham Estate. Windsor’s Home Park and Great Park were a constant presence for her, as they were for all of us.”

It’s well documented that Balmoral has a particular place in the Queen’s heart. The estate, with its Gothic-style castle, was purchased in 1852 by Prince Albert for his wife, Queen Victoria.

Hugo explains: “Balmoral has so much space and over the years the Queen has had great fun taking the grandchildren, and now the great-grandchildren, out on their ponies going for walks and picnics. There’s wonderful footage of Prince Charles on Loch Muick in a little boat. You can visit the loch on the estate and a lodge called Glas-allt-Shiel.”

Known as the ‘widow’s house’ it was where Queen Victoria escaped from the world, following the death of her husband, Albert.

“As I was walking around it, I thought, what is this sound that I’m hearing?” recalls Hugo. “And I stopped and realised the sound was my feet on the gravel. There was absolute total silence. It was fantastic.”

“The Queen used to stay in London until the 4th August, at least until the Queen Mother’s birthday, and then go up to Balmoral, by which time the estate would be closed to the public,” he explains. “But she now goes up in the last week of July, in which case she has to stay up at Craigowan, a house on the estate, where she’ll remain for a week before she goes into the castle.”

Over the years, Balmoral has provided opportunities for fishing on the beautiful waters of the Dee River, deer stalking and grouse shooting. Hugo says: “During her younger years, the Queen was keen on picking up (on bird shoots). She also loves her gundogs. People always think of the corgis, but she has Labradors and spaniels, which she trains for picking up and is very good with them.”

Her grandfather, George V, founded the Sandringham line of black Labradors in 1911 and, given the monarch’s incredible knowledge of bloodlines both equine and canine, all puppies born at Sandringham are personally named by her.

Many royal commentators believe the Queen’s rapport with dogs stems from them being her playmates growing up, as she and Margaret didn’t attend school, but country dog owners know that anyone who grows up with animals only ever sees them as part of the family.

The Queen’s incredible connection with horses ignited when her father King George VI gave her a Shetland pony named Peggy at the age of four. “Owing to her mobility problems, I don’t think she’s been riding much recently,” says Hugo. “However, she did ride five times at Balmoral last summer and hopefully she will again as the weather gets warmer. There was that lovely photo of her recently with her Fell ponies.

“Normally she would ride more than that, when she’s well she would ride every day, but she is 96. You wouldn’t have seen the Queen Mother on a horse at that age or a pony.”

In an ITV documentary filmed to celebrate Her Majesty’s 90th birthday, the Queen is seen planning her weekly diary and carefully scheduling in time to ride, weather permitting. “I am quite a fair-weather rider – I don’t like getting cold and wet,” she says. A statement to which all seasoned equestrians can relate.

Racing has taken her the length and breadth of the country, from York races and Doncaster to Glorious Goodwood, Newmarket and The Cheltenham Festival, horses are very much her beloved private hobby and guarded from the media gaze.

John Warren, the monarch’s bloodstock, and racing adviser, said: “She’s fanatic about racing, watching racing and breeding horses, and has been going to Ascot all of her adult life.”

Royal Ascot is believed to be her favourite event in the racing calendar. Thoroughbreds owned by Her Majesty have won four out of the five of the British Classics during the traditional flat racing season, including the 1,000 Guineas Stakes, 2,000 Guineas Stakes, the Oaks and the St Leger - with only the Derby eluding her.

And, in 2013, the Queen’s horse Estimate (an 80th birthday gift from the Aga Khan) claimed victory at Royal Ascot’s Gold Cup, making it the first time a reigning monarch had won in the race’s 207-year history.

As Winston Churchill once said: “No hour of life is lost that is spent in the saddle.”

Horses and dogs have been the motivation for our Queen to get out in the fresh air and escape from the madding crowd – whether hacking out, working and walking her dogs, or visiting her studs, yards, and most treasured racecourses - these are the rural tonics which have served Her Majesty well.

The majority of her riding takes place at Windsor. “The Queen can go to Buckingham Palace whenever she wants to, but Windsor is such a better place; she’s got acres to walk around, she’s got her ponies and she’s got her budgerigars. There’s an aviary up the long walk by the George IV gate on the right-hand side, just below the terraces. I know when she was waiting for whoever took over from Theresa May, and she couldn’t go up to Scotland because she had to sign in a lot of new ministers, she spent quite a lot of time with her budgerigars.”

The Queen would usually ride her fell pony Emma around Windsor’s Home Park and Great Park, with Terry Pendry LVO, BEM, stud groom and manager to The Queen at Windsor Castle riding out with her. The Queen took the decision to start riding native ponies 20 years ago as they were ‘a little nearer to the ground.’ And Emma, one of the Queen’s favoured riding ponies, is still going strong at the age of 24.

A champion of rare native breeds, in particular the Fell, Highland and the Cleveland Bay ponies (used for carriages at Buckingham Palace) a new photo released by Windsor Horse Show to mark the sovereign’s 96th birthday shows a beaming Queen with two of her gleaming fell ponies, Bybeck Nightingale and Bybeck Katie, in front of a magnolia tree in the grounds of Windsor Castle.

The Royal Farms at Windsor provides the home for Her Majesty Queen Elizabeth ll’s Windsor Jersey herd. It’s one of the oldest Jersey herds in the UK, with records that go back to 1871. The milk is currently sold to produce the Windsor Castle ice cream, which is available in The Farm Shop.

The Highland ponies and other rare breeds are bred at the Balmoral Stud, and many of her race horses come from The Royal Stud at Sandringham. Established at Sandringham in 1886 by Edward, Prince of Wales, The Royal Stud became influential in the development of the national Thoroughbred bloodstock.

Upon inheriting the breeding and racing stock from her father King George VI, The Queen took a keen interest in bloodstock breeding and her love of horse racing is something she shared with her mother, The Queen Mother, who adored National Hunt racing. The Queen prefers flat racing.

Hugo says: “At Sandringham, she’s got her stud so she’s happy with her horses and there’s also the beach.”

This was highlighted in the famous cine film footage of a beach BBQ and games with Prince Philips and the children on the beach at Sandringham.

“The Queen now lives at Wood Farm when she goes to Sandringham because Prince Charles has taken the big house. She went there on 6 February this year. A few years ago, Prince Philip had a few days spare and said let’s go to Sandringham and was surprised to see a bus draw up with telephonists, chefs, and other staff to run the big house.

“Luckily, the tenants at Wood Farm had moved out so he and the Queen took that over. There they could have a far more minimal staff, because she doesn’t want that fuss all the time.”

The Queen’s involvement in racehorse ownership began in 1949 and has spanned eight decades.  “She has a very good way of keeping her feet on the ground and knowing what’s going on at the stud or on the estate – she has an incredibly good radar.

“Anyone who has anything to do with horses can get straight through to the Queen immediately. Her trainers and grooms know exactly what time to ring her to update her with equestrian matters which she enjoys and, this in turn, demonstrates who she is,” says Hugo.